We had a lovely time when antiques expert James Braxton returned for his 3rd visit to us filming for the latest series of the popular BBC programme Antiques Road Trip.

First shown in 2010, each episode features two antiques experts who travel around the country in a vintage car competing to buy and sell antiques to see who makes the most profit. In the first episode of their road trip James Braxton will be competing against Izzie Balmer driving around Suffolk in an eye-catching red MGBT.

Due to air this autumn, the programme begins in Woodbridge, Needham Market and Ipswich and finishes with the auction in Tring Market.

James Braxton and Izzie Balmer began the day filming outside the Tide Mill and other sights around the town before James Braxton visited Woodbridge Antiques Centre in Quay Street, where Natalie Smith, the shop proprietor, showed him a variety of pieces from their thirty cabinets in order to help him select the best items to sell in a forthcoming auction.

The show will be broadcast this autumn so make sure you tune in to find out how he gets on. 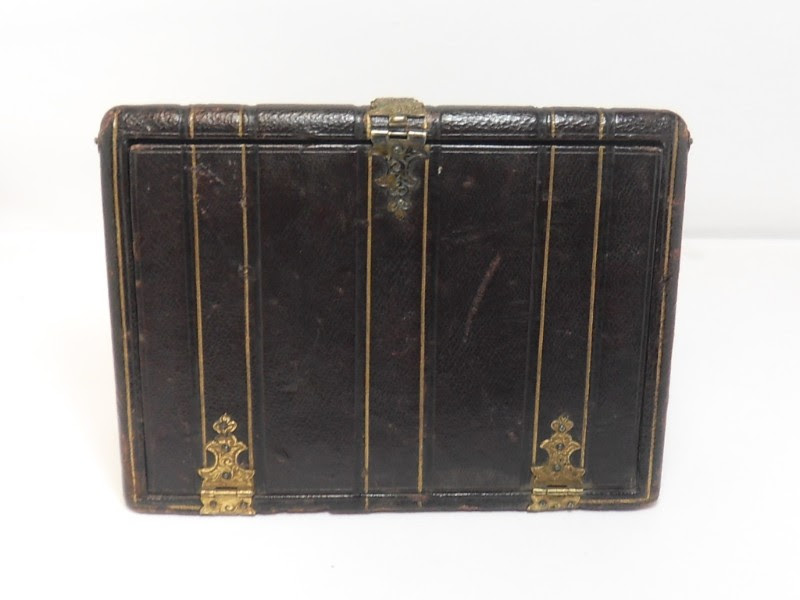 A beautiful Victorian ladies' Sewing Etui with carved mother of pearl handles. Often used for travelling, and carried by Ladies or their maids, the Etui contains all the necessary items for making alterations, etc. On the side is the registration mark for 1874.

The episode of Antiques Road Trip showing when Catherine Southon visited us last year aired on BBC1 on 24th January. Don't worry if you missed it, you can watch it on the BBC iPlayer now: https://www.bbc.co.uk/iplayer/episode/b09pyt60/ant...

We were really excited to celebrate our 10th Anniversary this year!

I can’t believe how quickly time has flown since we first opened in November 2007. Many thanks to all of you who were able join us for the anniversary party on Saturday, November 4, where everyone enjoyed a glass of fizz and a piece of cake and were presented with goodie bags. Much fun was had by all who visited and resulted in a very pleasurable day.

I would also like to say a big thank you to all of our customers who have supported us over the years, and we look forward to the years ahead.

Here are some pictures from the event:

Hester Bateman (1704-1794) is one of the best known English silversmiths whose work has touched the hearts of generations of collectors. One of the main reasons may surprise you if you are not aware that Hester is usually a female name. Yes - Hester Bateman was a woman and the mere fact that she was able to work at all in a field which at that time was completely dominated by men is an achievement in itself. 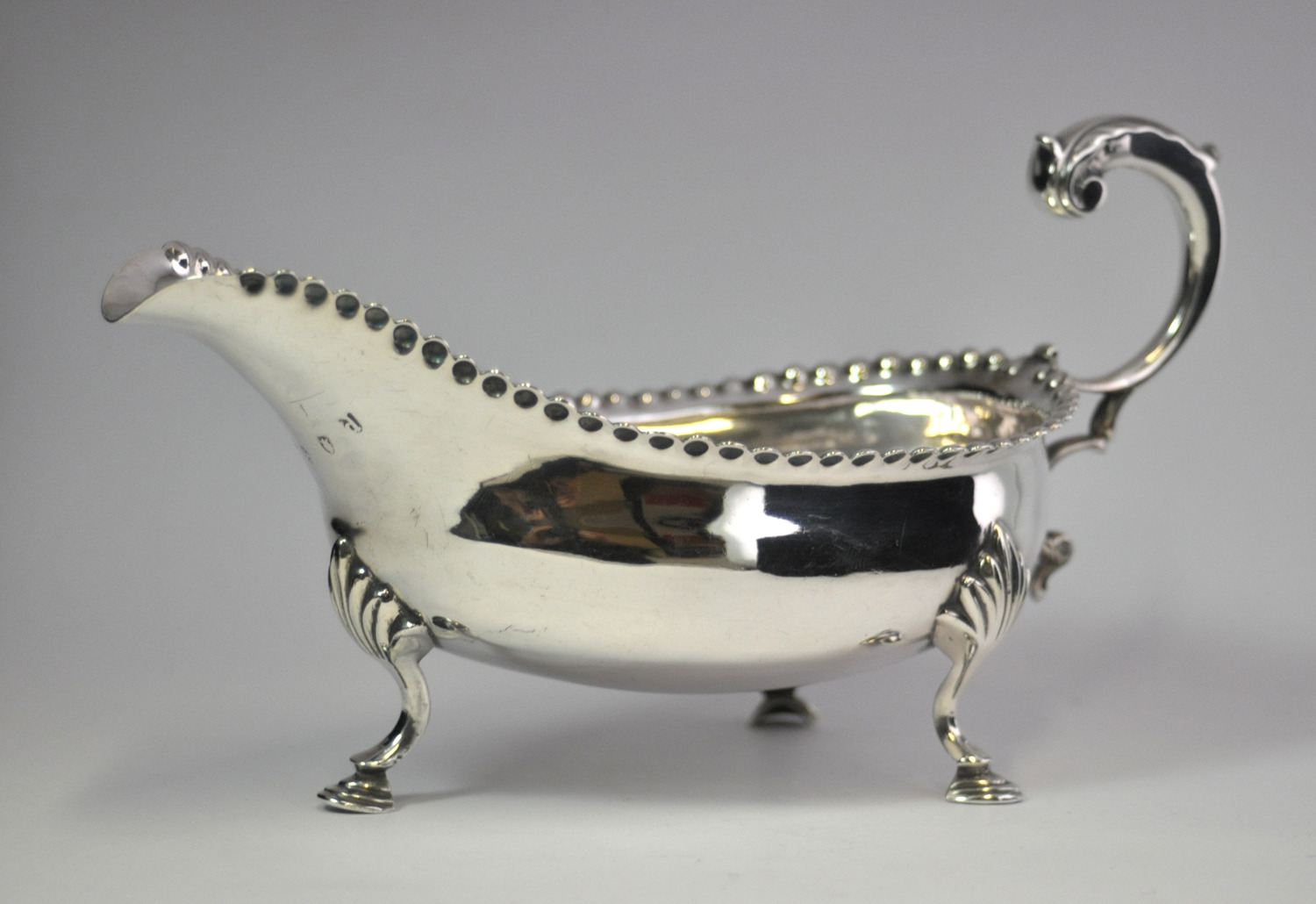 Born in 1704, the daughter of John and Elizabeth Needham, she married a goldsmith named John Bateman in 1732 with whom she had six children. John Bateman died in 1760 leaving all his household goods and his tools to his wife, so Hester went into business under her own name, registering her maker’s mark ( a simple “HB” script) at Goldsmith’s Hall, London on April 16th1761.

With her sons, Peter (1740-1825) and Jonathan (1747-1791) she continued to run the family business until she retired in 1790 at the age of 86. Hester had a great deal of business acumen and achieved considerable success within her own lifetime, partly by using techniques and machines which were at the forefront of technology at that time and by using thin sheet silver that enabled her to keep costs down and compete with companies producing Sheffield plate. The family specialised in household silver in a neo-classical style and their work often features bright-cut engraving, piercing and beading round the edges. Hester Bateman’s attention to detail and the quality of her work have earned her a place amongst the finest English silversmiths. 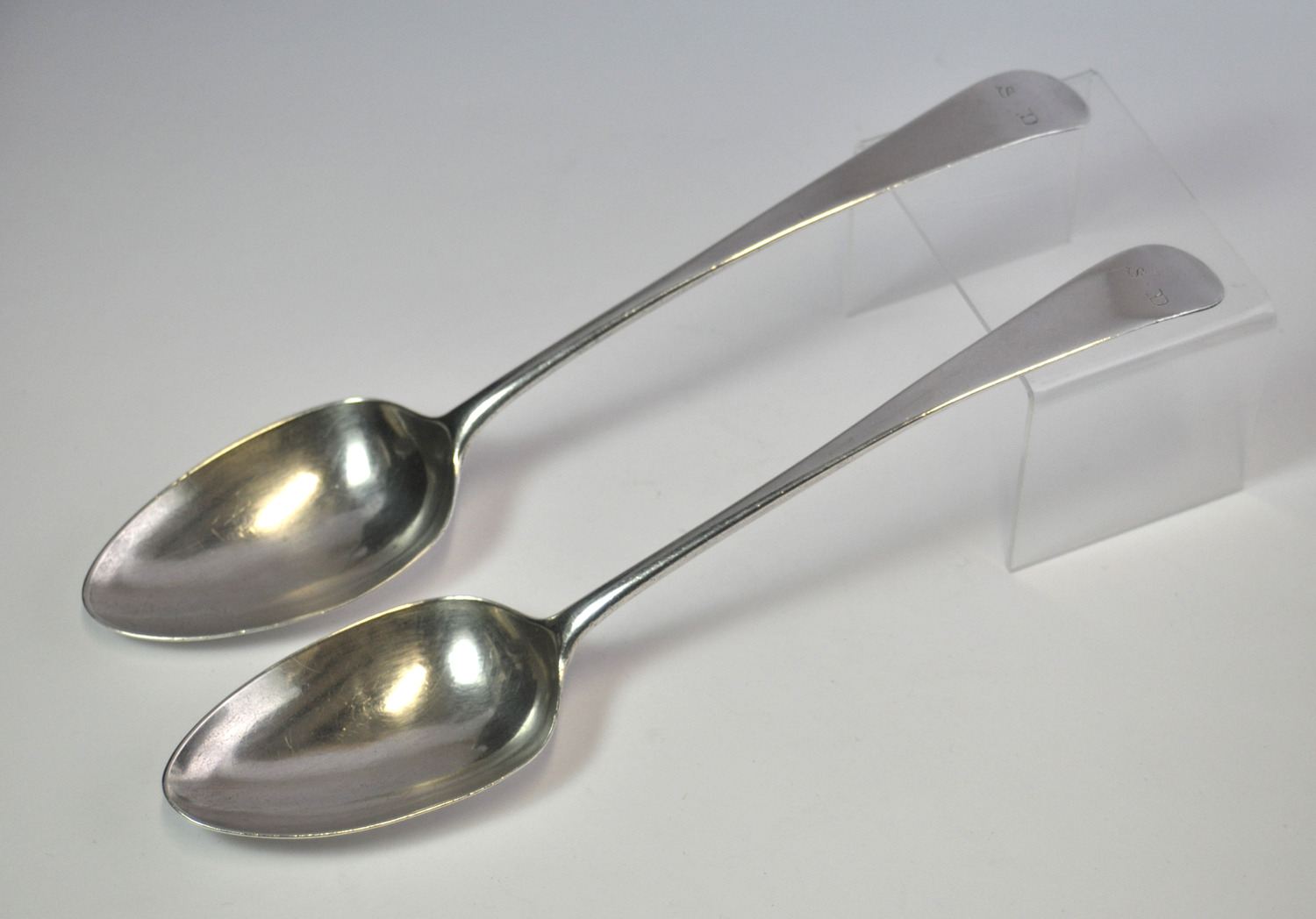 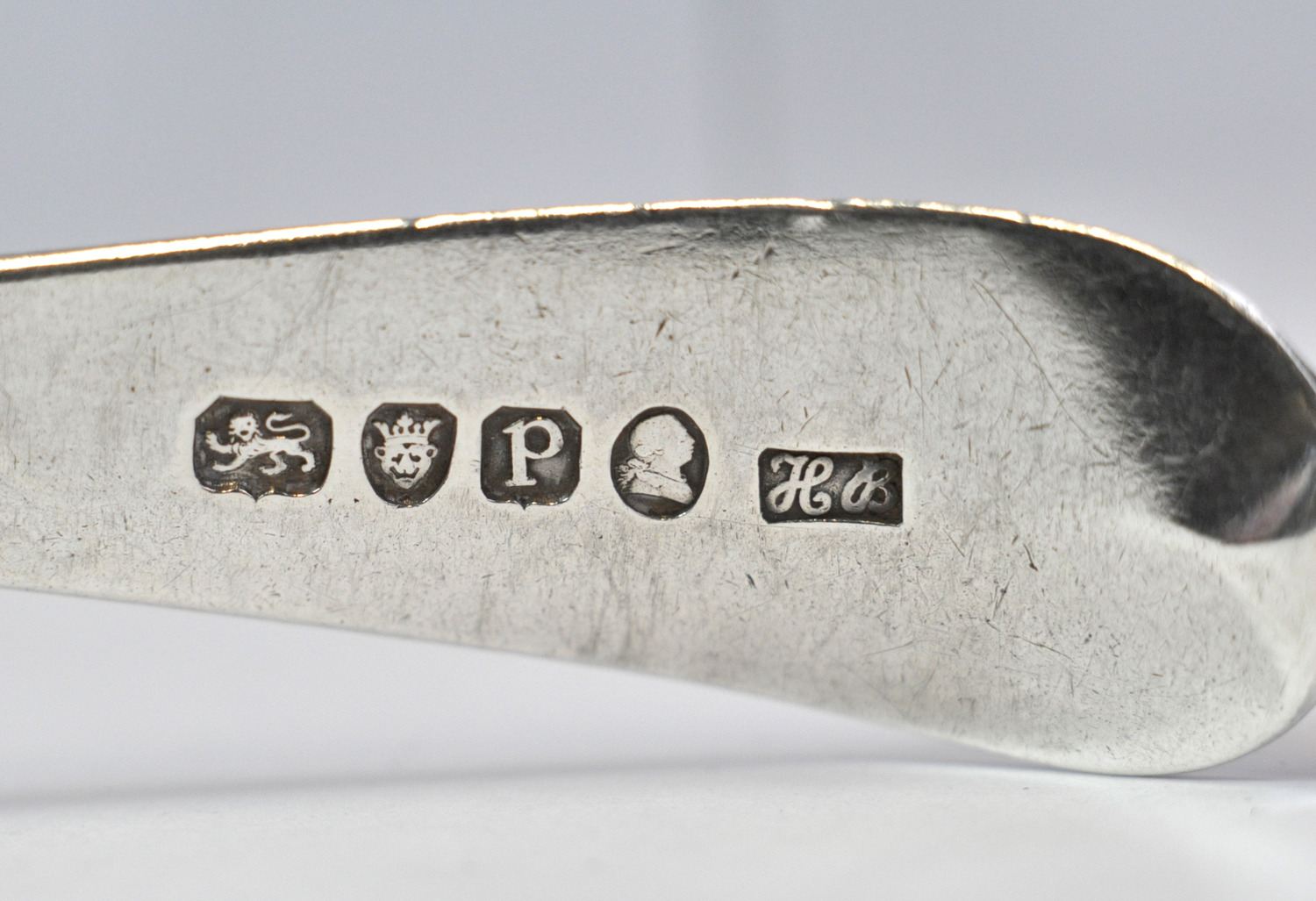 Hester Bateman's "HB" maker's mark seen on one of the table spoons pictured above. The rest of the hallmark shows (from left): the Lion Passant for sterling silver; the Leopard's Head wearing a crown for London (the crown was deleted from the London mark after 1820); the letter P for 1790; and the Sovereign's Head (George III) showing that duty had been paid on the item (used between 1784 and 1890).

Hester died in 1794 at the advanced age of 90. She was the first and most famous silversmith in a dynasty of four generations. When she retired, her sons Jonathan and Peter registered their own mark - the letters PB over IB – but, since Jonathan died in 1791, this mark was used for only six months and silverware bearing it is extremely rare today. After Jonathan’s death, his widow Ann Bateman continued working with her brother-in-law, Peter. On his uncle’s retirement, Jonathan and Ann’s son William (1774-1850) took over the business in 1815 and eventually passed it on to his own son, also named William. He was to be the last silversmith in the family: the business finally closed in 1840. 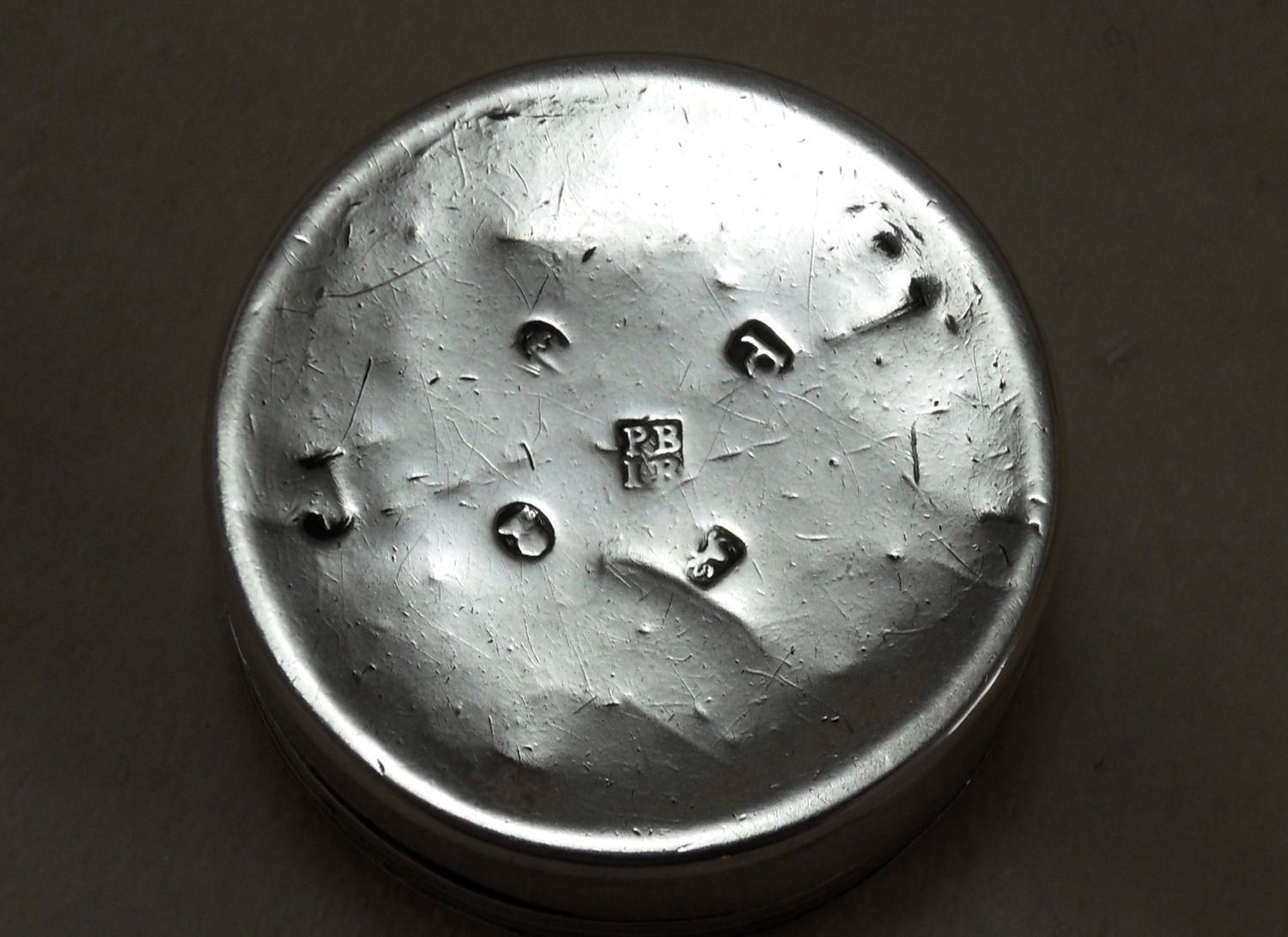 The rare maker's mark of Hester Bateman's sons Jonathan and Peter on the base of a silver pillbox. Showing the letters PB over IB, this mark was only used for six months due to Jonathan's death. Silverware bearing these marks are sought-after collector's pieces.